I purchased “Dweezil” in early 1995 from a pool of Baja Bugs being used for weekend offroading. They were all heavily damaged from the abuse and most had been retired as parts cars. We got the car running by pouring gas down the carburetor and placing a hand over the opening to choke. The engine came to life and I was off on a test run. We made the deal, I put new plugs in, and started home. The advantages to buying a car this way are it will be very cheap and one does not have to feel guilty about learning the practices of restoration on a car that has been saved from the crusher. The disadvantages are everything will need attention and will only be financially practical as a hobby.

The car broke down during the 70 mile trip home. I had just filled the fuel tank, and was starting down the road when it sputtered and died. I coasted into the parking lot of a Mexican resuarant and started troubleshooting. I didn’t really know what I was doing, but by using some WD-40 as starter fluid I was able to get it running again. Later I decided to test the vehicle’s limits and picked up speed. At about 70mph the car started shaking violently, so I backed off the accelerator and cruised home.

I was showing the car to a group of friends when someone suggested it needed a name, then someone else said “Dweezil” and it stuck. Over the next 3 years or so I tinkered with Dweezil, including removing the body and fitting new floorpans. I also stripped the paint on the tunnel forward of the rear torsion housings and primered as part of the floorpan project. The pans were never welded in, and will most likely be replaced with a thicker set.

In 1998 I no longer had a place to keep Dweezil, so it was temporarily placed back in the field I bought it from. I hated to do it, but I knew it would be safe there and am forever grateful to the folks who let me use the space. Dweezil sat there for 6 years before I had a place to keep it. Finally, in late May 2004 I made the trip to rescue Dweezil from exile. 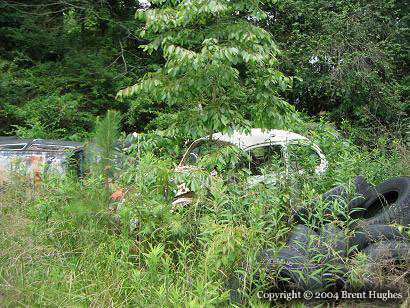 This is how I found Dweezil after 6 years of backyard “storage.” Notice the tree growing from under the left front wheel. 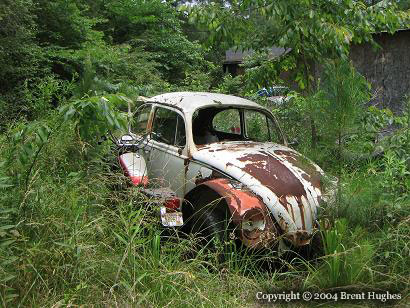 The windshield rubber deteriorated so much the windshield fell into the car. There was amazingly little additional rust inside as a result. 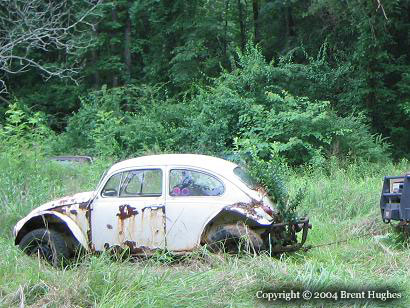 After cutting the tree down, we pulled Dweezil out with a chain. Believe it or not, the square knot I tied in the chain held! 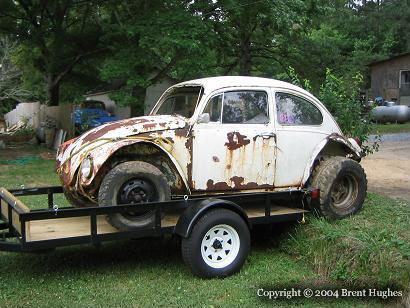 We had to switch the rear wheels to a stock size to fit on the trailer, and even those scraped against the rails. A 6 foot wide trailer would have been more comfortable. The short wall behind the trailer was the perfect height. 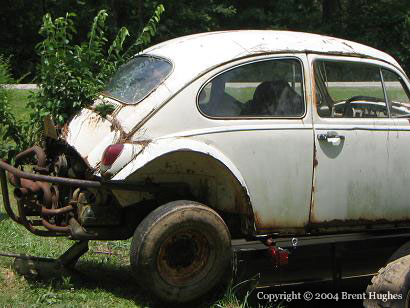 These wheels were just barely skinny enough. We removed the rear window so wind rushing through the front would not pop it out on the highway. The vine growing through the engine vents was left in place for entertainment value. 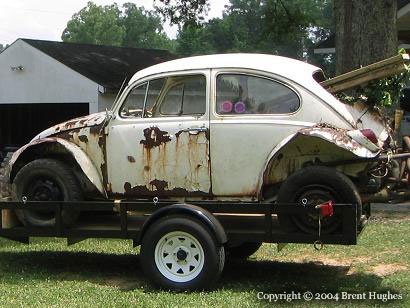 Success!! Not exactly a graceful load, besides being ugly the balance was slightly to the rear. If I had it to do over again we would put the car on the trailer backwards so the weight of the engine would be ahead of the trailer axle. We put some rocks in the trunk to balance it a little better… rocket science. 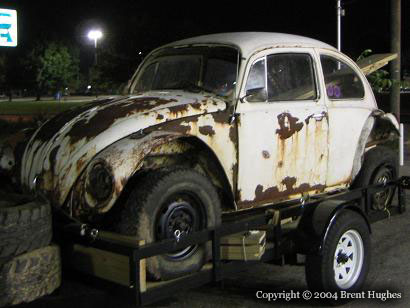 Here we are at a fuel stop catching looks from the locals. While loading the car the comment was made: “I think you oughta flip it on its lid so you catch more looks going down the road…” As funny as that would have been, we caught plenty of looks this way. 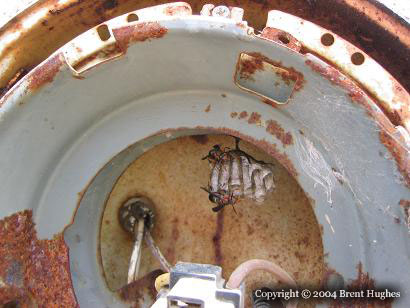 There were wasp nests throughout the car; one of these wasps actually hung on for the entire 500 mile trip! Our top speed was only 45mph, but still pretty amazing. 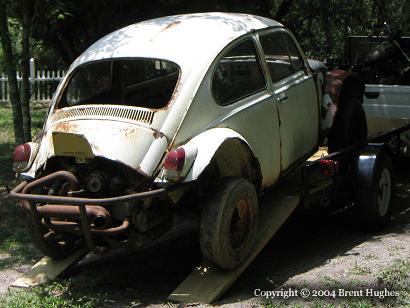 After unloading all the parts boxes and pulling out the vine growing through the rear vents, I eased the car down the ramps.

Home at last! Many thanks to the fine folks who provided a place to store the car for so long. Their help in loading the car on the trailer was wonderful- Thanks so much!

There was some excitement during the 500 mile journey home despite the slow speed. While in the middle of nowhere, the right rear tire on my truck exploded, ripping out the fuel filler neck and bending up the right rear quarter panel. After changing the tire and making roadside repairs to the fuel filler, we encountered an alligator crossing the road about 50 yards from the repair site.

Want adventure? Get an old, run down VW. Works for me!

This entry was posted in VW Bug Dweezil. Bookmark the permalink.